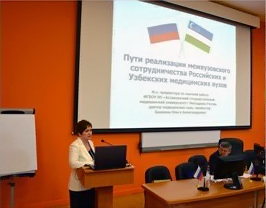 Director of Fergana branch of Tashkent Medical Academy Sultanov Gafurjon Nematbekovich and specialist of the department of international relations S.Ismailova; Director of Urgench branch of  Tashkent Medical Academy R. Ruziboyev; Vice-Rector for Research and Innovation of Samarkand State Medical Institute Sh.A. Yusupov, Rector of Andijan State Medical Institute M.Madazimov, who visited  Astrakhan State Medical University within the delegation, acquainted the students from Uzbekistan with the history of educational institutions they study. They told about the educational process and about training in residency courses, which is relevant for students completing their studies in Astrakhan State Medical University. 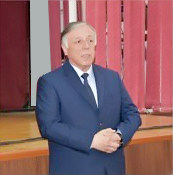 On April 8, the interregional conference of universities of Russia and Uzbekistan began its work in Astrakhan. Topic: Modern realities, trends and prospects for the development of bilateral cooperation between Russia and Uzbekistan in the field of higher education. The event was organized in accordance with the final resolution of the first Russian-Uzbek educational forum, which was held last year in Tashkent. The conference brought together representatives of government bodies and leaders of more than 40 universities of both countries.

The first block of the conference was divided into two sessions. The session «Practical mechanisms of inter-university cooperation between Russia and Uzbekistan» was held at Astrakhan Technical University. «Priority directions and tasks of scientific and educational cooperation between Russia and Uzbekistan» was held in Astrakhan State University. A report on the topic «Ways of implementing inter-university cooperation of Russian and Uzbek medical universities» was made by the acting vice-rector for research of Astrakhan State Medical University O. A. Bashkina.

Plenary session » New stage of cooperation: ways to implement the decisions of the first Russian-Uzbek educational forum» will be held in the residence of the governor of Astrakhan region. Representatives of such major educational institutions as the National Research Technological University» MISandS «, MGIMO, State Institute of Russian Language named after A.S. Pushkin, Volgograd State Agrarian University, ASTU, ASU, Uzbek State University of World Languages, Tashkent Agrarian University, Tashkent Medical Academy and others will participate in the event. 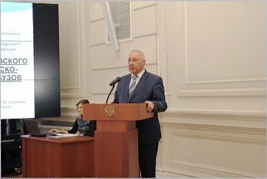 Also the Deputy Minister of Science and Higher Education of the Russian Federation M. Borovskaya, the First Deputy  Minister of Higher and Secondary Special Education of the Republic of Uzbekistan O.Abdurahmanov, substituent Head of the Russian Presidential Administration for Interregional and Cultural Relations with Foreign Countries A.Rybakov will participate in the panel discussions.

In the session block, presentations were made by representatives of all the universities of Russia and Uzbekistan invited for participation in the conference. The rectors of the leading Astrakhan universities: Kh.M. Galimzyanov- acting director of ASMU, K.A.Markelov- acting rector of ASU, A.N. Nevalenny-rector of Astrakhan State Technical University. Khalil Mingaliyevich presented a report on «Ways of implementing inter-university cooperation of Russian-Uzbek medical universities.» 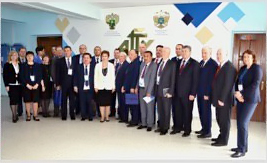 Participants of the conference will consider the implementation of the Road Maps between universities of Russia and Uzbekistan and formation of the agenda of the second Russian-Uzbek educational forum which will be held in Moscow in autumn. The conference was organized by the government of Astrakhan region, the Ministry of Science and Higher Education of Russia, the Ministry of Higher and Secondary Special Education of Uzbekistan and representatives of the Russian Embassy.