Residents of the "Yolgizbog"makhalla protested against corruption in medicine

When it comes to corruption, some people try to blame doctors. Is that really so?
This question was given to the participants of the event, which was organized at the initiative of the Pakhtaabad district Council of the Social Democratic Party of Uzbekistan «Adolat» in the citizens’ assembly of “Yolgizbog”mahalla. Initially, the citizens were informed about the reforms in the system, changes in the legislation on combating corruption and the work being done to further improve the quality of medical services. On the basis of the survey, the services provided to the populationby the doctors of the rural family polyclinic No.51have been studied. 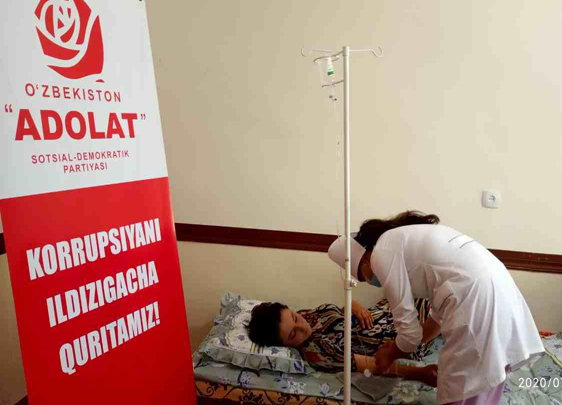 Muzaffar Bekmirzaev, a citizen of the mahalla:
– Frankly, I do not justify those who accuse medical staff for bribery. It is truly heroic to serve one’s own health in the name of human health. Hasn’t this been proven during the quarantine period, which has worried us all? Punishment should be increased for those who commit crimes. Then a healthy environment will be created in the society.
The medical examination held as part of the event was another step towards strengthening the health of citizens. Rehabilitation of 17 citizens diagnosed with various diseases has started.

Press serviceAndijan Regional Council of the